The Science Behind Grounding

Current biomedical research has established chronic inflammation as the culprit behind almost every modern chronic illness. When grounded, you are receiving a constant flow of free electrons, nature’s most powerful antioxidant. This allows the body to quickly neutralise positively charged free radicals - the hallmark of chronic inflammation. Grounding during sleep provides the body with multiple hours of these free electrons, at a time where the body undergoes the most healing and regeneration.

It is thought that many of these benefits stem from the constant supply of free electrons we are exposed to when we are connected to the Earth. These free electrons are some of nature’s most potent antioxidants. Here is an abstract explaining this phenomenon, taken from a recent paper published by The NCBI (The National Centre for Biotechnology Information), Author, Oschman JL

“A previous study demonstrated that connecting the human body to the earth during sleep (earthing) normalises the daily cortisol rhythm and improves sleep. A variety of other benefits were reported, including reductions in pain and inflammation. Subsequent studies have confirmed these earlier findings and documented virtually immediate physiologic and clinical effects of grounding or earthing the body. It is well established, though not widely known, that the surface of the earth possesses a limitless and continuously renewed supply of free or mobile electrons as a consequence of a global atmospheric electron circuit. Wearing shoes with insulating soles and/or sleeping in beds that are isolated from the electrical ground plane of the earth have disconnected most people from the earth's electrical rhythms and free electrons. The most reasonable hypothesis to explain the beneficial effects of earthing is that a direct earth connection enables both diurnal electrical rhythms and free electrons to flow from the earth to the body. It is proposed that the earth's diurnal electrical rhythms set the biological clocks for hormones that regulate sleep and activity. It is also suggested that free electrons from the earth neutralise the positively charged free radicals that are the hallmark of chronic inflammation. Current biomedical research has led to an inflammation hypothesis that is establishing chronic inflammation as the culprit behind almost every modern chronic illness. The research summarised here and in subsequent reports provides a basis for a number of earthing technologies (such as grounded bed sheets) that restore and maintain natural electrical contact between the human body and the earth throughout the day and night in situations where going barefoot on the earth is impractical. It is proposed that free or mobile electrons from the earth can resolve chronic inflammation by serving as natural antioxidants”.

One of the key regulators for the sleep-wake cycle is a hormone called cortisol and this hormone is responsible for determining the body’s circadian rhythm. In a recent study on the effects of grounding during sleep, as illustrated in the diagram below, the people who slept grounded were almost completely in sync with each other and with the Earth's natural day-night cycle, whereas those who were disconnected from the Earth remained way out of sync. 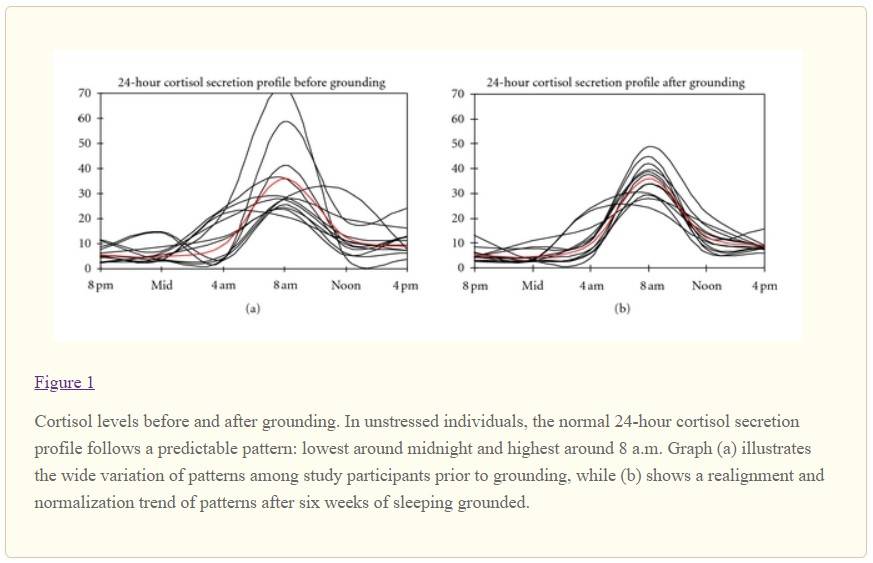 Sleeping indoors insulates us from the Earth, which means that we are disconnected from the Earth’s natural electric current. In addition to this, the further away from the ground you are, the greater the electrical charge your body carries. Every meter above ground level, there is a build-up of around 300 volts inside the body. So, if you are sleeping in a second storey bedroom, you will carry a charge of 1,000 volts, on average. This can cause an unhealthy build up of of excess free radicals in the body, leading to oxidative stress, inflammation and accelerated ageing. One study even found that people living in multi-storey homes had a 40% increase in stroke risk, with high body voltage being one of the causing factors.

The Effects Of Grounding On The Blood 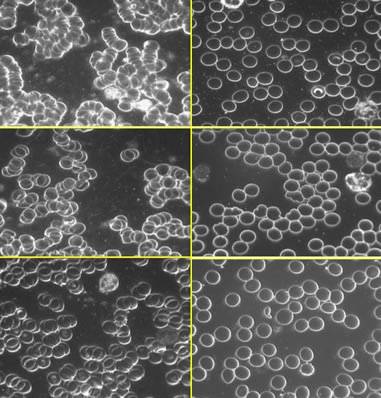 The diagram to the right demonstrates the effects of grounding on red blood cells.

Grounding was shown to have a natural blood thinning effect by reducing the viscosity (thickness) of the blood and decoupling red blood cells.

The surface of red blood cells carries a negative electric charge that maintains spacing of the cells. The stronger the negative charge the greater the potential of the cells to repel each other and the better the viscosity of the blood.

Earthing naturally increases the negative charge, enabling the red blood cells to repel each other more effectively and preventing them from clumping together.

The result of this is improved circulation, increased blood flow and stronger immune function. Blood flow plays an essential role in human health as the function of blood is to transport oxygen, nutrients and waste products around the body. Blood also carries white blood cells and killer ‘T’ cells which help to prevent infections and excessive build-up of toxicity.

The findings from such studies are further evidence that the human body was designed to be in regular contact with the Earth and that regular grounding might even be necessary to keep the body functioning properly and in good health.

The effects of grounding (earthing) on bodyworkers’ pain and overall quality of life: A randomized controlled trial

Effects of Grounding (Earthing) on Massage Therapists: An Exploratory Study

Effects of Grounding on Body Voltage and Current in the Presence of Electromagnetic Fields.

The effects of grounding (earthing) on inflammation, the immune response, wound healing, and prevention and treatment of chronic inflammatory and autoimmune diseases

The effect of grounding the human body on mood.

Earthing: Health Implications of Reconnecting the Human Body to the Earth's Surface Electrons